Posted on March 8, 2020 by maxemfingerrecruiting 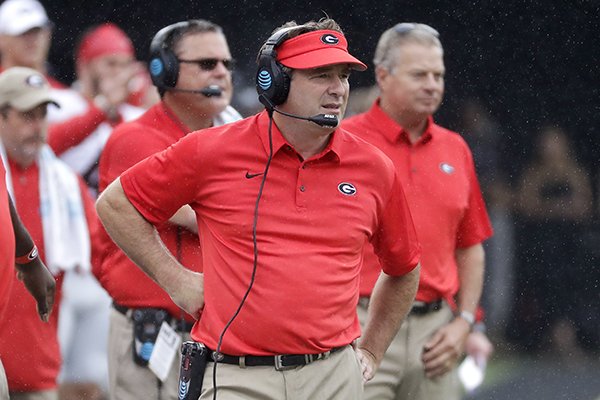 This Incredible Recruiting Class Really Validates Exactly What The Bulldogs Head Coach Kirby Smart {In Photo) Told The SEC On Media Days Before The 2019 Football Season. Coach Smart Told The SEC, After Spending Time With The Alabama Crimson Tide, That He Felt That Both Alabama and Georgia, Did Not Spend That Much Time in Evaluating The Senior Highlight Film of Top Prospects and Obviously Did Not Take Into Account Their Senior Season.

Obviously, If They Did Not Take Into Consideration The Top Prospects Senior Film, They Did Not Take Into Consideration His Measurables, Which THE MEARS RATINGS Are Based Upon. Since Bulldogs Head Football Coach Kirby Smart Believes That Senior Highlight Film is of Great Importance, He Obviously Believes That Measurables Are Also of Great Importance.

So, In Fact, The Georgia Bulldogs May Have Probably Signed The Most Players With a 3,000 MEARS RATING of Any of The Top Five Teams. If a Player Rated a 3,000 or Better, I Gave Him a 3,000, But The #1 Player in Each Recruiting Class Was Given a 3,025. With Eleven Georgia Bulldog Players With a 3,000 or Better Rating, It Was Very Difficult To Decide Who The Best Georgia Bulldogs Player Was For THE 3,025 MEARS RATING, But After Carefully Evaluating All Eleven Players, I Selected The Versatile, Athletic Defensive Tackle Jalen Carter Over QB Carson Beck, OT Broderick Jones, RB Kendall Milton, Rush End Mekhail Sherman, CB Kelee Ringo, and Darnell Washington, While Keeping In-Mind That All Seven Georgia Bulldog Players Are Going To Be 2023 NFL #1 Draft Choices.

Carson Beck Is Definitely Another Under-Rated Super Quarterback Freak For The Georgia Bulldogs!

On His First Play of His Senior Highlight Film, Beck Threw about a 35-Yard Touchdown Pass, But on His Second Play, He Was Pressured Out of The-Pocket and He Rolled To His Left and Raced 35-Yards For a Touchdown. Then On His Fourth Play, He Was Pressured Out of The Pocket Again and He Ran About 20-Yards Down The Right Sideline, For Another First Down. After Two More Touchdown Passes, He was Again Was Pressured and He Rushed Up-The-Middle For 20-Yards, Before Sliding Into Home For Another First Down.

Beck From Jacksonville Mandarin, Florida Has Some Incredible Athletic Speed Measurables With a Really Impressive 4.4 Pro Shuttle At The Opening Last Summer and That 4.4 Pro-Shuttle Was One of The Fastest For a Quarterback at The Opening Event. Beck Also Ran a Very Impressive 4.62  Forty. He Has Great Mechanics, Great Arm Strength, and Great Accuracy.

Beck is Unbelievably Quick and If He Is Not Necessarily Lightning-Fast as a Runner, He Is Unbelievably Quick  In The Same Manner That Aaron Murray Could Sit Back In-The-Pocket For a Long Time and Then Rip-Off An Incredible 50-Yard Touchdown Run. Beck Has The Ability To-Keep Defenses Honest With His Running Ability, But Unlike Murray, Beck is a  he’s kind of a Long Strider Who Gets To Defenders Much Quicker than They Are Expecting.

Beck Also Had Some Very Impressive Athletic Seasons In High School Baseball, Before He Started To Concentrate on Football. He Was a Baseball Pitcher and First Baseman and In Fact, Beck Earned A Baseball All-American Honorable Mention Award In Both 2019 and 2018 On All-American Baseball Teams and Beck Had Already Committed To The Florida Gators, in Baseball, Before He Decided To Focus on Football.

The University of Alabama finished up Their Summer Camps And Once Again Identified Some Of Their Top Targets, But One Special Target Might Have Surprised Some People.

Crimson Tide Recruiting Reporter Martin Houston Joined The Blitz And Shared Some Even More Insight Why That Verbal Commitment Should Make All of The Alabama Crimson Tide Fans Really Excited About The Vast Potential of Carson Beck.

Back To The Georgia Bulldogs!

“I Am Excited To-Get Carson Beck,” Said Coach Kirby Smart. “This Guy Has Come to Our Camps Since Before His Ninth-Grade Season. He Has Grown-Up and Has Gotten Better and Better Every Year. I Can Not Say Enough About Carson and His Competitive Nature Inside Him. He Is a Definite Winner.”

Then, As a Senior, After Losing 18 Starters off of The 8A State Championship, Beck Led Mandarin High School to a 7-4 record and He Completed 136 of 278 Passes for 1,843-Yards and 20 Touchdowns and  Rushed For Another 167-Yards and 6 Touchdowns on a Mandarin Team that Graduated 4 Top Wide Receivers and 11 Offensive Starters Off of The 2018 State Championship Team in The Highest Florida Football Classification.

As a Junior, Beck Shocked The Entire High School Football World As He Led His Mandarin High School Team To Their First Ever State Championship. But Then as a Senior, After Losing Those The 18 Starters and Only Having a 7-4 Record With Young and Inexperienced Players, Beck Became The Unbelievable, Unwarrantable Ridicule of Scorn by Scouts and The Various Recruiting Services. The Criticism and Ridicule Came, Because They Thought  Beck Was Overrated, Because He Did Not Win Another State Championship.

Beck Gets Jump-Start On College Career!

“I Think That Beck Might Be More of a More Prepared College Quarterback, Because of Him Being The Huge Victim of The Ridicule of Being Over-Rated After His Senior Season and He Handled The Situation Extremely Well,” Said Mandarin Head Coach Bobby Ramsey.

Beck is a Big Super Quarterback Freak, With a Really Great Arm, Is Very Mobile, Is A Very Smart Student of The Game, and Has Been Compared to Super Quarterback Andrew Luck. Beck Was Definitely An Unjustified Under-Rated Player That Was Re-Rated From a 5-Star To a 4-Star After His Sr Year, Because Recruiting Services. Thought He Was Over-Rated. When Beck Leads The Bulldogs To Some Championship Games, They All Will Prove Me Right.

Georgia Bulldogs In Under Armour Game