Posted on October 24, 2019 by maxemfingerrecruiting

MVP Players Must Be On Winning Team!

SIDEBAR I: Through The First Eight Games of The 2019 Season, There Were About Six Heisman Trophy Favorites! Coming Into The Season, Including  Quarterbacks Trevor Lawrence and Tua Tagovailoa As The Two Favorites. After Week #8, According to The Caesars Sportbook The Top Six Now Are: QB Joe Burrow, QB Tua Tagovailoa, QB Jalen Hurts, RB Jonathan Taylor, QB Justin Fields, and WR CeeDee Lamb. QB Sam Ehlinger and QB Justin Herbert are Other Heisman Trophy Candidates. 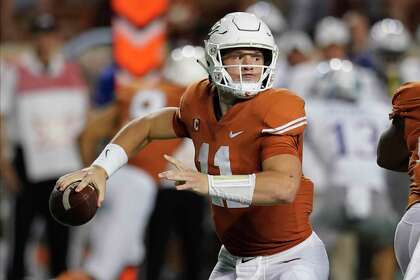 The Texas Longhorns Super Dual Threat Quarterback Sam Ehlinger (#11) Had an Unbelievable Game Against The Kansas Jayhawks as He Completed 31 of 44 Passes For 399-Yards and 4 Touchdowns. Ehlinger also Rushed For Another 91-Yards on 14 Carries, Giving Him an Incredible 490-Yards of Total Offense and 4 Touchdowns in The Texas Longhorns 50-48 Victory. Ehlinger Also Posted a Great 172.1 Quarterback Rating.

The #15 Ranked Texas Longhorns in Front of Their Home Crowd in Austin, Texas and The Longhorns Were Also Honoring Their 1969 National Championship Team with Special Uniforms and a Halftime Celebration and They Were a Huge 23.5 Point Favorite over The Kansas Jayhawks, but They Still Needed Some Incredible Play From Their Local, Senior Tri-MVP Quarterback Sam Ehlinger and Their Great Kicker and Tri-MVP Cameron Dicker, To Emerge as The Winner Against an Upset-Minded Jayhawks Team on Saturday Night.

The Upset-Minded Jayhawks Were in The Upset Process in the Second Quarter When They Took an Early 17-14 Lead Over The Texas Longhorns. From This Point, There Were 5 Lead Changes and They Were Also Tied 2 Times.

Things Started To Get Really Gloomy in Austin, Texas When The Jayhawks Scored a Touchdown with 1:11 remaining in the Game To-Come Within One Point at 47-46 and Their Successful Two-Point Conversion Did Indeed Give The Upset-Minded Jayhawks a 48-47 Lead and Possible Victory.

So Now, The Texas Longhorns Are On the Brink of Being Upset and So The Longhorns Put This Huge Big-12 Game In The Hands of Their Local Quarterback Sam Ehlinger (6-4, 235, 4.56) From Austin Westlake and on The Foot of Their Super Kicker, Cameron “Dicker The Kicker” To-Win The Game.

The Longhorns Were Given The Football With Only 1:11 Minute To-Play After The Kansas Jayhawks Had Just Taken a One-Point Lead. Ehlinger Then Drove The Longhorns 66-Yards to The Jayhawks 21-Yard Line. In This Final Drive, Ehlinger Was Incredible as He Completed 6 Passes and He Ran for a First Down on a Third Down Situation. Ehlinger Passed For 2 Touchdowns in The Fourth Quarter to Super Wide Receiver, Devin Duvernay, who Finished with Eight Catches for 110-Yards and 2 Touchdowns. Duvernay had Another Great Game as he Caught 8 passes for 110-Yards and His 2 Touchdowns.

Dicker Did The Rest, as He Calmly Kicked a 33-Yard Field Goal as Time Expired and To-Give The #15 Ranked Texas Longhorns a 50-48 Victory in One of The Wildest Big-12 Games in Big-12 History With a Frantic Fourth Quarter That Also Included The Two Teams Exchanging 6 Touchdowns, 2 Field Goals and a Blocked Extra Point for a 2-Point Safety.

This Winning Field Goal Kick Was The Second Career Game-Winner For The Sophomore Kicker, Cameron Dicker.  His Other Game-Winner Was in The Final Seconds To-Beat The Oklahoma Sooners Last Season.

“A Win is a Win,” Ehlinger said. “I Am Very Thankful That We Were Able to Pull Out.”