The UCLA Four MVP’s Of Thompson-Robinson, Felton, Phillips, And Woods Were Incredible Against The Cougars. By Super Scout Max Emfinger

Posted on October 5, 2019 by maxemfingerrecruiting

In This Game, Thompson-Robinson (6-1, 197, 4.52) Completed 25 of 38 Passes For a Career-High 507-Yards and 5 Touchdowns, Including 322-Yards in The Second Half as He Led The UCLA Bruins To-Rally Past The Washington State Cougars Which Had Owned a 49-17 Third-Quarter Lead, Behind Their Great Quarterback Anthony Gordon, Who Leads The Country in Passing Yards.

Thompson-Robinson Led The UCLA Bruins To-Victory After Being-Down by 32-Points In The Second Half in a Game Against The Washington State Cougars in the Highest Scoring Game in The PAC-12 Conference History.

Dorian Thompson-Robinson is The Eighth UCLA Bruin Football Player to Receive The Walter Camp National FBS Offensive Player of The Week Award Since 2004, and The First Since Former Bruin Quarterback Josh Rosen on September 6, 2015. He Also Was Awarded and The Davey O’Brien Foundation Quarterback of The Week, Becoming The First UCLA Bruin Since Josh Rosen To-Win This Award.

Kyle Philips (#2) From San Marcos, California Was Awarded The PAC-12 Freshman Player of The Week #4 For his Outstanding Performance Against The Washington State Cougars in Pullman. The Red-Shirt Freshman All-Purpose/Wide Receiver Scored on an Incredible 69-Yard Punt Return to give The Bruins a 60-56 Lead in The Fourth Quarter.

Against The Washington State Cougars Demetric Felton (#10) Caught 7 Passes From Super-Star and Co-MVP Quarterback Dorian Thompson-Robinson For 150-Yards and 2 Touchdowns as The UCLA Bruins Pulled-Off an Incredible 67-63 UPSET Victory Over The Cougars in a Key PAC-12 Game.

Also Remember That The UCLA Bruins Were Losing by 32-Points in The Third Quarter, but Their Incredible Come-Back To Victory Shocked The World and The Washington State Cougars.

The UCLA Bruins Head Coach Chip Kelly Said That He Had Never Lost Faith in His UCLA Team, Even-though His Team had Lost Their First Three Games of The Season. Coach Kelly Also Said That The Bruins Had Played Really Hard In All 12 Quarters of Those First Three Losses, and That It Had Paid Huge Dividends when The Bruins Fell Behind by 32-Points To The #19 Ranked Washington State Cougars on Saturday.

In This Game, Co-MVP Dorian Thompson-Robinson (6-1, 197, 4.52) Completed 25 of 38 Passes For a Career-High 507-Yards and 5 Touchdowns, Including 322-Yards in The Second Half as He and Felton (5-9, 185, 4.32) Helped Lead The UCLA Bruins To-Rally Past The Washington State Cougars Which Had Owned a 49-17 Third-Quarter Lead, Behind Their Great Quarterback Anthony Gordon, Who Leads The Country in Passing Yards.

Also, In This Game, The Cougars Quarterback, Gordon Passed For 570-Yards and Broke The Washington State School Record With 9 Touchdown Passes. The Jacksonville Jaguars Starting Quarterback, Gardner Minshew II Was on The Cougars Sideline and He Had Previously Owned The Record. Minshew Was an NFL 6th Round Draft Choice and He Previously Held The Washington State School Record of 7 Touchdown Passes in a Game, That Was Set in November 2018 Against Arizona. 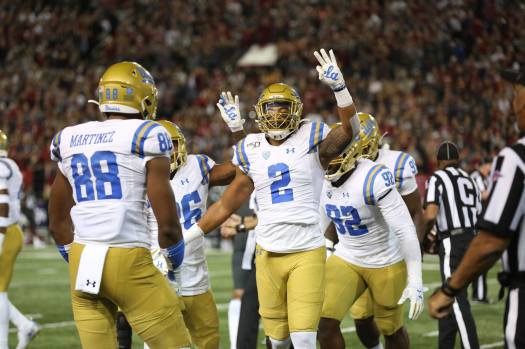 On The Very First Series of the Game, The UCLA Bruins Got-Off To an Unbelievably Great Start as Another Co-MVP Inside Linebacker Josh Woods (#2)  Intercepted a Gordon Pass and Thompson-Robinson Then Threw a 14-Yard Touchdown Pass To Josh Kelley for a Great 7-0 Lead For The UCLA Bruins. Woods (6-2, 234, 4.66) From Upland, California, Was Incredible on Defense For The Bruins as He Later Recorded a Quarterback Sack and Recovered Two Fumbles, To-Go With his Interception.

Later, Gordon Found Travell Harris for a 10-Yard Touchdown, Giving  The Cougars a 21-10 Lead, But Felton Had Some Ideas About The Cougars Lead as He Returned The Ensuing Kickoff 100-Yards for Another Touchdown as He Brought The Score Back To Within Reach With 21-17. On This Incredible 100-Yard Kickoff Return, Felton Broke Four Tackles and “Juked” Another Three or Four Cougar Defenders As He Ran into The End-Zone. With His 7 Catches For 150-Yards, 100-Yard Kickoff Return, and 4 Rushes For Another 13-Yards, Felton Recorded an Incredible 263-Yards of All-Purpose Yardage.

Gordon Replied With a 4-Yard Touchdown to Easop Winston II. Who Was  The Favorite Target For Gordon as He Caught 7 Passes and 4 Touchdown Passes for The Cougars, as They Jumped to a 35-17 Lead at Halftime and Then Went-Up by 49-17 Early in The Third Quarter. Gordon Actually Broke The Cougars Record With a 33-Yard Touchdown Pass to Winston, for a 56-46 Lead With 10:08 Left in The Game.

The Bad-News For The Cougars, Was That The UCLA Bruins, Who Failed To-Score more than 14-Points in any of Their Three Losses, Stormed Back and Scored 3 Touchdowns in The Final Four Minutes of The Third Quarter. That was a Part of 7 Touchdowns in Eight Possessions That Many Were Caused by Several of The Washington State Cougars Turnovers.

In The Incredible Come-Back Victory, Co-MVP Quarterback Thompson-Robinson Threw a 15-Yard Touchdown Pass to Felton With Only 1:07 Left in The Game as The UCLA Bruins Overcame The 32-Points To Record This Unbelievable and Wild 67-63 PAC-12 Victory Over The Cougars. After The Winning Touchdown Pass by Felton, There Was Only About a Minute Left in The Game, but The Leading Passer in The Country, Anthony Gordon Was Sacked and he Fumbled, which was The Sixth Turnover For The Cougars and The Bruins Recovered The Football and Then They Ran-Out The Clock.

Demetric Felton Also Won Some National Awards Following His Incredible  Game Against The Washington State Cougars. The All-Purpose Wide-Receiver/Running Back Won The PAC-12 Special Teams Players of The Week #4 After Running a Kickoff 100-Yards For a Touchdown For The Bruins Only Touchdown In The Second Quarter. This Kickoff was The Bruins Longest Return Since 2014. His 263-Yards of All-Purpose Yards, Including an Unbelievable Two Touchdowns of More than 90-Yards.

Felton Recorded a 94-Yard Catch-And-Run Touchdown at The End of the Third Quarter and This Touchdown Pass Was The UCLA Bruins Second-Longest Passing Play in The Bruins History. Felton, Then Caught The Game-Winning Touchdown Pass With a 15-Yard Screen-Pass With Only 1:07 Left in The Game. Felton was Awarded When Named to The Paul Hornung Award.

“Demetric Felton is a Very Special Athlete and He is Getting Better,” Said Coach Kelly.