Posted on October 4, 2019 by maxemfingerrecruiting 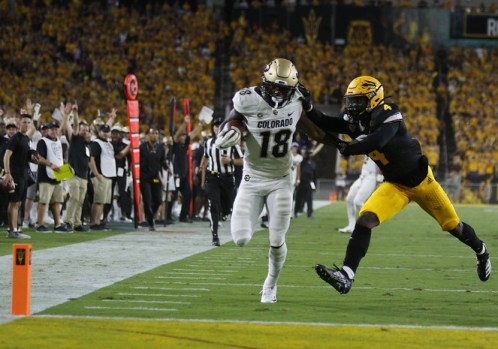 The Buffaloes Rallied-Around Those Three Players who were Left and Pulled-Off An Unbelievable UPSET Victory and a Rare PAC-12 Conference Road Victory Over The Arizona State Sun Devils.

The Colorado Buffaloes Quarterback Steven Montez (6-4, 230, 4.72) From El Paso Del Valle, Texas Completed 23 of 30 Passes For 337-Yards and 3 Touchdowns and All 3 of His Touchdown Passes Were To One of his Super-Star Wide Receivers in Tony Brown (#18) From La Miranda, California and The Colorado Buffaloes Beat The #24 Ranked Arizona State Sun Devils, a Highly Ranked Team and Road Opponent PAC-12 Conference Team.

This Was The First Time For The Colorado Buffaloes in 17-Years To Beat A Ranked Team, On The Road, with Their 34-31 Victory. The Victory Was The Buffaloes First Victory Over a Ranked Road Team Since Beating The UCLA Bruins in 2002, a String of 36-Games.

The Colorado Buffaloes (3-1, 1-0) Had Scored 24-Points by Halftime and They Racked-Up 477-Yards of Total Offense Against The Sun Devils, Despite Having To-Play Most of the Game Without One of Their Super-Star Wide Receivers in Laviska Shenault, Due to an Injury.

Shenault (6-2, 220, 4.52) Was One of The Top Wide Receivers in The Country in 2018, as He Caught 86 Passes For 1,011-Yards and 6 Touchdowns. Shenault is Also a Very Versatile and Athletic Receiver as He Also Carried The Football in Short-Yardage Situations out of The Wildcat Formation with 115-Yards and 5 More Touchdowns on 17 Carries.

The Texas Tech Red Raiders Transfer, Tony Brown (6-1, 195, 4.42) Had Only 3 Career Touchdown Passes Before This Game, But in This Breakout-Game, He Picked-Up The Slack, With Shenault Injured, as He Caught 9 Passes for 150-Yards and All 3 of The Touchdown Passes by Montez.

Tony Brown Began His Collegiate Football Career with The Texas Tech Red Raiders and Red Raiders Coach Darrin Chiaverini Recruited Him To Lubbock and Then Became his Outside Wide Receivers Coach. After Coach Chiaverini Moved To The Colorado Buffaloes Brown Decided To Transfer To The Buffaloes.

After Transferring To The Buffaloes, Brown Did Not Play For The Buffaloes  in 2017, But Instead, he Chose To Enroll in January. Counting the 2018 Season, Brown Had Two Years of Eligibility. 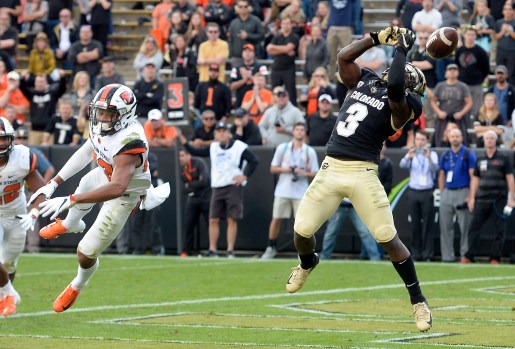 During The Classic 34-31 UPSET Overtime Victory For The Colorado Buffaloes Over The Nebraska Cornhuskers, The Buffaloes 96-Yard Touchdown Was On A Flea-Flicker From Quarterback Steven Montez (#12) to Slot Receiver K.D. Nixon (#3) and It Was The Longest Pass Completion in The Football Bowl Subdivision Since Austin Appleby of Florida Threw a 98-Yard Touchdown Pass to Tyrie Cleveland Against The LSU Tigers on November 19, 2016. It was also The Longest Touchdown in The Colorado Buffaloes History.

The Colorado Buffaloes Quarterback Steven Montez (#12) Was Named to The Pre-Season Maxwell Award Watch List, Awarded Annually to The College Football Player of The Year.

The Buffaloes Rallied-Around Those Three Buffaloes who were Left and They Pulled-Off An Unbelievable PAC-12 UPSET Victory and a Rare Road Victory Over The Arizona State Sun Devils.