Posted on September 30, 2019 by maxemfingerrecruiting 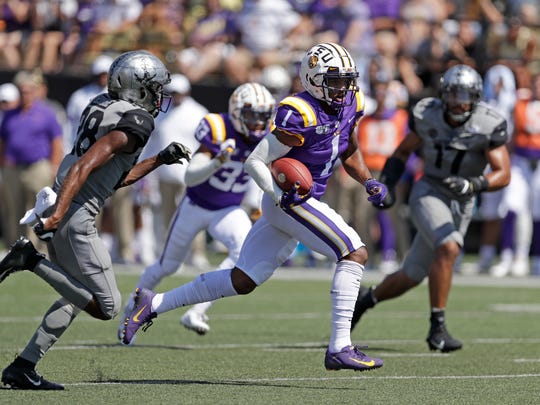 The LSU Tigers Sophomore Co-MVP Wide Receiver Ja’Marr Chase (6-1, 205, 4.42, 36.5, 4.09) Was The Main Target of Burrow as He Caught an Incredible 7 Passes for 199-Yards and an amazing 3 Touchdowns in The First Half, Including a Beautiful 64-Yard Catch and run for a Touchdown; plus another 51-Yard Touchdown. Chase (#1) From Metairie Archbishop Rummel, Louisiana, Ended The Game With a Career-High 229-Yards Receiving and Another Career-High 4 Touchdown Catches in The 66-38 Victory.

Apparently, The Vanderbilt Commodores Did Not Learn Their Lesson After The First Quarter of Play. A Quarter after The LSU Tigers Wide Receiver Ja’Marr Chase Demonstrated His 4.09 Short Shuttle quickness as he Turned-On The Incredible Speed and Quickness For a 64-yard Touchdown Run and Then Crushed Them Again on His 51-Yard Touchdown Run.

In That First Half Where Chase Caught 7 Passes For 199-Yards, and Where Every Single One of His Touchdown Catches of 25, 51, and 64-Yards Making The LSU Tigers Highlight Reel, The Tigers Ran Away With a 38-17 Lead Against The Vanderbilt Commodores in Nashville.

The First Touchdown Catch For Chase Came on a Great Catch and Run with about 8:46 Remaining in The First Quarter. Chase Caught a First-Down Pass at the 50-Yard Line and He Was Incredible as He Made a Multiple of Vanderbilt Defenders Miss-Him and He Then Sprinted Into The End-Zone to give The LSU Tigers a 14-7 Lead.

Later in The First Quarter, Burrow Hit Chase Again With a 25-Yard Catch, But Chase Made an Unbelievable Catch in The Corner of The End-Zone With Several Vanderbilt Defenders All Over Him For The Touchdown, but The Great Catch Gave The LSU Tigers a 28-7 Lead.

With His 4 Touchdown Catches Against The Vanderbilt Commodores, Chase Tied The LSU Tigers Record With Tony Moss For Touchdown Catches in The Same Game. For The 2019 Season, Chase Ranks 11th in The Country in Yards With 20 Catches For 397-Yards.

In Watching Ja’Marr Chase Play In-Person and Watching Him on His Highlight Film, The First Words That Comes To My Mind Was THE FREAK. Over-And-Over, Chase Continues To Make Huge “Big-Plays” and He Makes Them All Look Simple, And With Chase, Everything looks Really Smooth.

In 2017, Rummel High School Had a Phenomenon Wide Receiver and So I Evaluated Him on His Rummel Highlight Film and I Quickly Agreed With All of The Other Scouts and College Coaches, but I Wanted To See Him Play In Person, So on a Friday Night, I Drove To Metairie,

I Can Not Remember Who Rummel Was Playing, That Friday, but Chase Did not Disappoint Me as he Was a TOTAL FREAK in Catching The Football and Returning Kickoffs. I Remember That In This Game, Chase Caught Two Touchdown Passes and Returned a Kickoff for Another Touchdown. I Will NEVER FORGET That He Had Close To 300-Yards of Total Offense.

Chase Finished his Senior Season at Rummel High School With Single-Season Records of 61 Receptions of 1,011-Yards and 15 Touchdowns Passes. It Was  The First 1,000-Yard Season Recorded by a Rummel Raider Receiver. He Also Finished as The Rummel Career Leader in Receptions, Receiving Yards and Touchdowns with 115 Catches For 2,152-Yards and 30 Touchdowns.

Chase Had Around 30 Scholarship Offers and He Played in The Under Armour All-American Football Game and So Almost Every D-1 Team in The Country Wanted Him. Also Remember That Chase Recorded a Sensational 4.09 In The Short Shuttle, Which Demonstrates an Unusually Great Quickness For any Player Weighing Over 200-Pounds.

Initially, The Auburn Tigers Were Thought To Be In The Lead For Chase and In Fact, He Had Also Originally Been Committed To The Florida Gators and Not The LSU Tigers. Chase Decommitted From The Gators in November, Just After The Gators Opted To-Move-On From Head Coach Jim McElwain.

Then, It was February 2, 2018 and The National Signing Day Was Only a Few Days Away on Tuesday, and The LSU Tigers Coaching Staff Did Not Want To-Allow One of The Top High School Wide Receivers In The Country To Sign With Another College Team Out-Of-Their-Own-Backyard.

Ja’Marr’s Dad, Jimmy Chase Answered His Phone One Day and He Heard The Distinct Voice: “Jimmy, Get Your Family Ready! The Whole LSU Tigers Coaching Staff Is Coming.”

On February 7, On National Signing Day, Chase Signed With The LSU Tigers and Not The Auburn Tigers or The Florida Gators and his Father said That The LSU Tigers All-Hands-On-Deck-Visit Was The Main Reason.