Posted on August 22, 2019 by maxemfingerrecruiting

All Three Quarterbacks Played Their High School Football In Texas and in The Big-12 Country. They All Three Were True Freshman Freaks at Their First College, and Then They Transferred To The Oklahoma Sooners.

Mayfield Played His High School Football at Austin Lake Travis in Austin, Texas and Murray Played at Allen High School. a Suburb of Dallas, Texas.  Hurts Played For His Father at Channelview High School in Channelview, Texas. As a Senior, Hurts Passed for 2,384-Yards and 26 Touchdowns and he Also Rushed for 1,391-Yards and 25 More Touchdowns; giving Him 3,775-Yards of Total Offense and an Amazing 51 Touchdowns Accounted-For.

In that First Opening Game, Mayfield Completed An Amazing 43 Passes out of 60 Attempts for 413-Yards and Four Touchdowns and He Broke A Texas Tech Red Raider School Record, held by Billy Joe Tolliver.

Mayfield (#6) is Still Believed To-Be The First True-Freshman Walk-On Quarterback To-Start The Season-Opener At Quarterback. In That First Start Against SMU, Mayfield Fell-Short 4 Completions of the D-1 NCAA Record For a Single-Game For a Freshman Quarterback. In That Game, Mayfield was Named as The Big-12 Offensive Player of The Week and he Was Also The First Texas Tech Red Raider Freshman Quarterback To Receive The Same Honor, Since Texas Tech Red Raider Head Coach Kliff Kingsbury Did It In 1999.

Mayfield was Then Awarded The Burlsworth Trophy Award in Both 2015 and 2016. The Burlsworth Trophy Award is Given To The Best D-1 Football Player who Began His Career as a Walk-On. In 2015, Mayfield Was Also Named as The Big-12 Freshman Offensive Player of The Year. Shortly After Earning That Honor, Mayfield Announced That He was Leaving The Texas Tech Program, Because of a Miscommunication With The Texas Tech Coaching Staff.

Oklahoma Sooners Head Football Coach Bob Stoops Confirmed That  Mayfield Was not Eligible To-Play Until The 2015 Football Season and He Lost a Season of Eligibility, Because of The Big-12 Conference Transfer Rule, After Following an Unsuccessful Transfer Appeal. In 2014, Mayfield was Confirmed by The Oklahoma Sooners Head Coach Bob Stoops That He Would Become An Oklahoma Sooners Walk-On. In That 2015 Season, Mayfield Passed for 3,700-yards and 36 Touchdowns and it Placed Him Fourth in The Heisman Trophy Award Race.

Baker Mayfield Won The Heisman Trophy Award Winner in 2017, Which was The Initial Season For The Oklahoma Sooners New Head Coach Lincoln Riley. In that 2017, 14-Game Season, Mayfield Completed 285 of 404 Passes for 4,627-Yards and an Incredible 43 Touchdowns, with 311-Yards Rushing and 5 More Touchdowns, and a Mind-Boggling 198.9 Quarterback Rating. 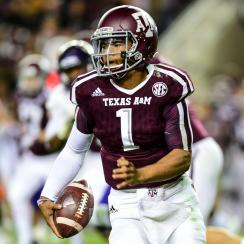 In his First Start For The Aggies, Against South Carolina, Murray (#1) had an Incredible Game as he Passed for 223-Yards and a Touchdown and Rushed for Another 156-Yards and Another Touchdown, Giving Him 379-Yards of Total Offense and Two Touchdowns. With This Unbelievable Game, it Made Murray and Cam Newton as The Only Two SEC Quarterbacks in the past 20 Years to gain over 100-Yards Passing and Rushing, including a Touchdown Pass and a Rushing Touchdown in their First Career Start.

On December 24, 2015, Murray Made The Announcement That he was Going To Transfer to The Oklahoma Sooners. As Per The NCAA Transfer Rules, Murray Had to Sit-Out The Entire 2016 Football Season. 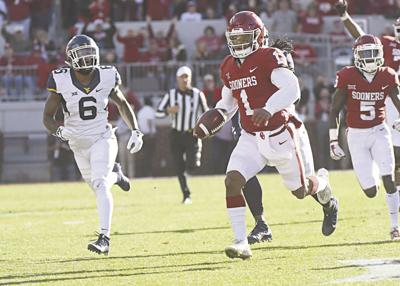 After Two Consecutive Heisman Trophy Winning Oklahoma Quarterbacks, In Mayfield and Murray, All of The Football Fans in The Country Will Be Watching The Oklahoma Sooners and Their Starting Quarterback Jalen Hurts as he Will Try To Duplicate Their Heisman Trophy Honors!

Jalen Hurts is not a Baker Mayfield or a Kyler Murray, But in a Very Special-Way, He Might Be Even More Talented and He Is Still a Talented Super-Star and a Heisman Trophy Candidate For The Oklahoma Sooners and Head Coach Lincoln Riley. Hurts is not Going To Automatically Throw for 4,000 or 5,000-Yards, But He Is In An Unbelievable Explosive Offense and He Has An Incredible Reputation as a Leader, Who Will Win The Big Games, and who is Able To Throw and Run the Football.

Mayfield and Murray Were Able To-Have At Least One-Year To-Learn The Lincoln Riley Explosive Offensive Spread System, when They were Transfers, while Hurts will have to Learn The System More Quickly and Then Be The Leader In-Charge of The 2019 Oklahoma Sooners Offense.

In his First Two Seasons as The Starting Quarterback For The Alabama Crimson Tide, Hurts Passed for a Combined 4,861-Yards, 40 Touchdowns, to go along with 1,809-Yards and 21 touchdowns rushing, giving Him an Incredible 6,670-Yards of Total Offense and 61 Touchdowns.

In his Freshman Season For The Alabama Crimson Tide, Hurts Passed for 2,780-Yards and 23 Touchdowns, Against SEC Defenses and SEC Competition, While Mayfield Passed for 2,315-Yards, 12 Touchdowns, and with 42 Fewer Attempts in his Freshman Year in The Texas Tech Big-12 Program. Hurts also had a Higher Passing Efficiency Quarterback Rating than both Mayfield and Murray had in their Freshmen Seasons.

Hurts, a junior, lost his Starting Quarterback Job in 2018 to Sophomore Sensation Tua Tagovailoa, who led The Alabama Crimson Tide to a 14-0 record before Losing to The Clemson Tigers in The National Championship.

The Former Alabama Crimson Tide Quarterback has The Great Arm Strength and Talent To-Lead The Oklahoma Sooners Offense. Hurts also has a Great Rushing Ability and Prowess, and Although he Might Not Be as Explosive as Murray, he is much larger than Murray which makes him Tougher To Bring-Down In The Open-Field and in The Red Zone.

As The Alabama Crimson Tide Starting Quarterback in 2016 and 2017, Hurts Led Them To Back-To-Back National Championship Games, and Although Clemson Won The First One in 2016, He Struggled in the First Half Against Georgia and Led Coach Saban To Replace Him for Tagovailoa in 2017.

One of The Most Amazing Early Accomplishments of Jalen Hurts Was His First Day of Alabama Practice as a True-Freshman. Hurts Graduated at Mid-Term and He Wanted To-Go Through The 2016 Spring Training and so He Enrolled in School and Quickly Showed-Up For Practice.

As Soon as Coach Nick Saban (In Photo) Saw Hurts, He Quickly Had Him Go and Take a Physical, and He Then Rushed-Him To The Practice Field To Run The Alabama Scout Team Against The Alabama #1 Defense and Pretend That he was The Clemson Dual-Threat Quarterback, Deshaun Watson.

Hurts Was Given a Specific Job and it was To Prepare The #1 Alabama Defense Against The Clemson All-American Dual-Threat Quarterback Deshaun Watson Before The 2016 National Championship Game.

“You Really Can Not Coach Experience,” Coach Saban Said. “You also Can Not Really Coach Maturity and Experience at The Quarterback Position. Guys That Have Played for a Long Time have this Sort of Foundation and Experience. The Only Way To Get it, is by Doing it in a Game.”

The 2016 Alabama Crimson Tide Offensive Coordinator Lane Kiffin Has Always Been Jalen Hurts Biggest Supporters. When The Crimson Tide Were Debating On Whether To Offer Hurts a Scholarship in The Spring of 2015, Coach Kiffin Drove To Channelview, Texas To Personally Scout and Evaluate Him and He Then Came Back To Tuscaloosa and Told Coach Saban that Hurts was a Potential NFL First Round Draft Choice.

Kiffin (In Photo With #2 Hurts) also Told Coach Saban That Hurts Reminded Him of a Smaller Version of Carolina Panthers Super-Star Quarterback Cam Newton, who Won The 2010 Heisman Trophy Award For The Auburn Tigers.

“Hurts is a Power-Lifter and He is Plenty Strong,” said Kiffin. “He Could also Play Linebacker, but He Throws The Football Really Well, but Persuading Coach Saban To Recruit Hurts was One Thing, but tying To Persuade Coach  Saban To Start him as a True Freshman For The Alabama Crimson Tide was an Entirely and Completely Different Challenge.” Kiffin knew he needed help in Changing The Mind of Coach Saban.

While Coach Saban was Really Committed in Starting a More Experienced Quarterback, Coach Kiffin, Currently The New Head Coach at Florida Atlantic, was Shocked With The Unbelievable Athleticism and Running ability of Hurts. Kiffin also Believed that Hurts Could Bring Another Running Dimension to The Alabama Crimson Tide, Although He Might Not Be As Polished as a Passer, like The Other Quarterback Contenders.

After Being Named as The Alabama Starting Quarterback in 2016, A year later, Hurts Found Himself in a Rematch against The Clemson Tigers, In Preparing His Alabama Teammates Against The Same Rival That He once Imitated With The Alabama Scout Team. “Kind of weird,” Hurts said.

While Tagovailoa Ultimately Claimed The Alabama Crimson Tide Starting Quarterback This Past Football Season, Hurts Stayed on The Team and played in 13 of The Alabama 15 Games, but of Great Importance, Hurts Replaced Tagovailoa in The Fourth Quarter of The SEC Championship Game as The Crimson Tide Were Down and Hurts Led Them to Victory Over The Georgia Bulldogs, as He Completed 7-of-9 Passes for 82-Yards and a Touchdown, while Rushing for Another 28-Yards and Another Touchdown.

“I Have Never Been More Proud of a player than Jalen,” said Coach Saban. “It is Unprecedented to have a guy who Had Won 26 Games as a Starting Quarterback in Two Years and Start as a True Freshman and Lose Only Two Games and Then All of a Sudden, he is not The Starting Quarterback. 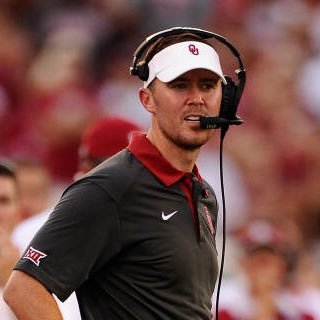 With The Great Help of Head Coach Lincoln Riley and an Oklahoma Sooners Team coming off Back-To-Back 12-Winning Seasons and Consecutive Playoff Appearances (three in the last four years), Hurts could see his Stats Get Even Better and Have his NFL Draft Stock Get Even Higher. Hurts Can Also Give Tagovailoa and Lawrence some real Heisman Trophy Award Competition in what was once Considered a Two-Man Race.

With His New The Oklahoma Sooners Team, Hurts could do more than just bring home a Third Consecutive Heisman Trophy Award  to The Oklahoma Sooners. Hurts Could Also Find Himself in The Middle of a Fourth Straight College Football Playoff National Championship Game and a chance to win a Second National Championship with Another College Football Team.