Posted on August 13, 2019 by maxemfingerrecruiting

The Overall Career Paths of Drew Brees and Teddy Bridgewater (#5) are Very Similar in That Both Super-Star Quarterbacks Were Under-Rated and Under The Radar in Different Situations in Their Football Career.

Brees left Purdue with “Mind-Boggling” Stats and one of the Most Impressive Quarterbacks in Big-10 History as he broke Two NCAA Passing Records, 13 Big-10 Records, and 19 Purdue Passing Records. Some of these Records are still standing, including his 1,026 Completions for 11,815-Yards Passing, and 90 Touchdown Passes. His 12,692-Yards of Total Offense was also a Record. He also had Seven 400-Yard Games and Sixteen 300-Yard Games.

So, Now It is Time For The NFL Draft, but Before The 2001 Draft, Brees Attended The 2001 NFL Scouting Combine where he did much better than most NFL Scouts Had Expected. Most All of The NFL Scouts knew that he was about Six-Foot, but they did not know that he was so Quick and he Shocked The NFL Scouts when he ran an Amazing 4.21 in the Pro-Shuttle. Brees Also Ran a 4.83 Forty at The NFL Scouting Combine, but on Pro-Day, Brees Improved that Forty Time to a Great 4.67.  Also Remember that Many NFL Passing Quarterbacks can not Even Run a 5.0 Forty.

Everyone thought that Drew Brees would be Drafted in the First Round of the 2001 NFL Draft, but too many NFL Teams believed that he was Just Too Short to become a Great Passing Quarterback in The NFL.

Although Brees did not have Great Height, he had Incredible Passing Stats and Shockingly Great Measurables  for a Passing Quarterback; but he was not Drafted until The San Diego Chargers took him in the First Pick of Round Two in the 2001 Draft which was the #32 Overall Selection. Teddy Bridgewater (#5) Played For The Louisville Cardinals; Drafted #1 By The Minnesota Vikings In The 2014 Draft; and Was Selected To The 2015 NFL Pro Bowl.

In 2013, Playing For The University of Louisville Cardinals, Teddy Bridgewater Completed 303 Passes of 427 Attempts for 3,970-Yards and 31 Touchdowns; With An Incredible 171.1 Quarterback Rating. Bridgewater was Selected  as The Game MVP in The 2013 Russell Athletic Bowl.

How appropriate would it be, if once again, The New Orleans Saints Next Franchise Quarterback was somehow a Pro Bowl Talent who No Other NFL Team Seemed to Want With Such Incredible College Stats. How did 31 NFL Teams pass on this Super-Star Quarterback In The 2014 Draft?

SIDEBAR I: In The New Orleans Saints and Minnesota Vikings Pre-Season Game, in The Mercedes-Benz Superdome Stadium, The Minnesota Vikings Kick-Return Man, Ameer Abdullah, Returned The Opening Kickoff 23-Yards and Returned Two kickoffs For 43-Yards. He Also Rushed For 63-yards, Giving Him 106-Yards and a 17.7-Yards Per Touch Average. Bridgewater Had 134-Yards of Total Offense as These Two Super-Stars Were The Top Two Total Yardage Players in The Game. Abdullah (#31) Was Drafted #2 and #54 Selection in The 2015 NFL Draft by The Detroit Lions and Then Led The NFL in Kickoff Returns for The Lions in The 2015 Season With 1,077-Yards. Abdullah (5-9, 205, 4.42, 42.5, 3.95, 130, 24) had Incredible Measurables.

SIDEBAR II: I Invited Ameer Abdullah To My Third Annual Max Emfinger 2010 Super Elite Top Gun Camp in Florida. About Three Days Before The Camp, I Got A Call From His Mom and She Asked Me If I Would Pick-Up Her Son and His Homewood HS Teammate In Mobile, Alabama, As I Passed Through Mobile On My Way To Florida. I Told Her That I Would and I  Stopped in Mobile at a Gas Station On Interstate-10, on My Trip To My Super Elite Top Gun Camp in Florida. I Then Met Her Again Taking Ameer and His Teammate Back To The Same Gas Station After The Top Gun Camp.

SIDEBAR III: At That Third Annual Max Emfinger 2010 Super Elite Top Gun Camp, in Florida, Odell Beckham Jr, Ronald Martin, Ameer Abdullah, Terrence Tusan, Julian Hayes, Derrick Milton, Denzell Warner, and Corey Trim, Were Incredible Players and They All Came To The Camp Without a Single Scholarship Offer, Before Their Senior Season in High School. In Fact, Beckham (Top Gun #43 Jersey Below), Martin, and Abdullah (#31) Made Numerous One-Handed Catches and Even My Coaches Were Impressed. Beckham (6-0, 198, 4.33, 38.5, 3.94, 122) Also Had Incredible Measurables.

Trim and Abdullah Were Also Incredible at Cover Cornerback on Defense at The Top Gun Camp. Abdullah Signed With The University of Nebraska and Trim Signed With Louisiana Lafayette. Abdullah Also Returned One Of His First Kickoffs For The Cornhuskers, 100-Yards For a Touchdown.

During a Vikings Team Practice on August 30, 2016, Bridgewater Suffered An Unusually Weird, Non-Contact Injury To His Left Leg. After a MRI Testing, it was Confirmed That Bridgewater had Torn his ACL and he Also Suffered Some Other Structural-Damage that Also Included an Unusual Dislocation of his left Knee. Bridgewater Dropped-Back To-Pass and His Left Knee Buckled as He Crumbled to The Turf.

Teddy Bridgewater Was Not-Only The Vikings #1 Draft Choice, but he was Their Pro-Bowl, Super-Star and “Rising-All-Pro” Quarterback, But He Had Not Played in a Game Since Suffering His Devastating ACL Knee Injury During Fall Training Camp Practice in 2016. This Injury Almost Cost Him His Left Leg and The Long-Road Back Was Going To Be Very Difficult For Bridgewater as He Had To-Watch Quarterback Case Keenum Leading The Vikings to a 10-3 Record as They Entered Their Game Against The Redskins.

In This Redskins Game, Bridgewater Suited-Up and was an Active Player on The Sideline and was Seen, on The Sideline, as he Was Wiping-Away Some Tears as The Redskins Were Getting Ready To-Kickoff and Then The Incredible Deafening Standing-Ovation (In Photo Below) For His Return and It Gave Bridgewater (#5) an Unbelievably, Huge Inspirational Lift. 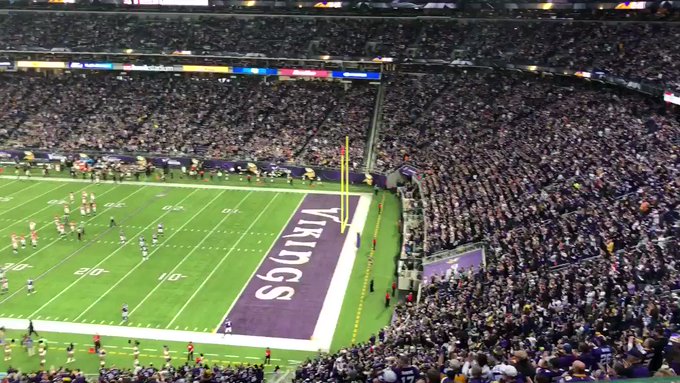 “Man, I was Just-Trying to keep it together,” Bridgewater Said After The Vikings 38-30 Victory in a Game That he Did Not Play. “It’s just, Huge Opportunities like This That Do Not Come-Around Twice. So When You Get That Second Opportunity, You Cherish it, and You Hold-On-To-It, and You Never Want To-Let it go. Today is One Of The Best Days of My Life.”

Zimmer Praised Bridgewater For Everything Great That he Did For The Minnesota Vikings Before His Catastrophic Knee Injury Three Years Ago That Derailed His Potential Hall of Fame Career. Zimmer Has Remained The Biggest Fan of Teddy Bridgewater, Even After He Left The Vikings and Landed As a Drew Brees Backup With The New Orleans Saints.

“Coach Payton Told Me How Much He Likes Teddy and He Thinks That He Has Got The Future Quarterback in The Building,” Said Zimmer. That is Exactly What The Minnesota Vikings Thought Three Years Ago Before The Team Practice on August 30, 2016.

Teddy Bridgewater was Getting Better and He Started Throwing The Football in The Vikings Mini-Camp, but The Vikings Did Not Think That He Was That Much Better and Declined To-Honor His Fifth-Year Option on His Rookie Contract which made Bridgewater a “Free-Agent” after The 2017 Season.

Although Bridgewater Was Throwing The Football and Getting-Better, On June 6, 2017, Coach Mike Zimmer had some Interesting Things To Say: “Bridgewater Has a Long-Way To-Go Until he is Fully-Healed, but I am Very Impressed by His Rehab Progress at This Point,” said Head Coach Zimmer.

With This In-Mind, Bridgewater Started The 2017 Season on The “Player Unable To Perform” List. He then was Activated To The Active List In Week #15 Against The Cincinnati Bengals. He Came Into The Game in The Fourth Quarter and The Whole Crowd Gave Him Another Standing Ovation and The Vikings Won 34-7, but Bridgewater Never Played Again For The Vikings.

Then, on March 18, 2018, Bridgewater (#5) Signed a One-Year Contract With The New York Jets, but The Jets Contract Only Guaranteed A 500,000 Signing Bonus Contract, Although he Could Earn Another Maximum of $15 Million Dollars From His Non-Guaranteed Salary and Other Incentives.

The New York Jets Quickly Realized That By-Having A Multitude of Great Quarterbacks, They Could Trade Bridgewater, To The New Orleans Saints, And Receive The Saints 2019 Third-Round Draft Pick! This Trade Confirmed That Super-Star Rookie Quarterback, Sam Darnold, Would Be The Jets Starting Quarterback!

Bridgewater (#5) Brings A Lot of Unbelievably Great Talents and Skills To The Saints, Including A Tremendous Amount of Leadership Skills. Another Great Skill is His Ability To-Lead His Team To Victories and an Uncanny Ability To Find His Receivers and To-Hit Them With Tremendous Accuracy.
Before Signing With The Saints, Bridgewater Was a Free-Agent and He Could Have Signed With His Hometown Miami Dolphins and He Probably Could have Become The Dolphins Starting Quarterback. Bridgewater, However, Knew Exactly What He Was Doing, by Signing With The New Orleans Saints.
The New Orleans Saints Are a Tremendously Talented Team With Young Players and Their Young Skill Players on Offense May Be The Best in The NFL, Including Five Pro Bowl Skill Players. The Five Talented Pro Bowl Skill Players Include Quarterbacks Brees and Bridgewater; Wide Receiver Michael Thomas; Running Back Alvin Kamara; and Tight End Jared Cook!
In That Pre-Season Game Against The Minnesota Vikings, I Thought That Bridgewater Was Outstanding and Earned His Backup Spot and The Eventual Starting Quarterback When 40-Year Old Brees Retires After 2019 or Later.
In That Game, Bridgewater Demonstrated The Leadership and Passing Accuracy, just like When he was Selected To The 2015 Pro Bowl. He Completed His First Five Passes and Completed 14 of 19 Passes For 134-Yards and a Touchdown> It Could Have Been Much Better, but he Also had Three Dropped Passes, Including A Dropped Touchdown Pass by Pro Bowl Thomas.