Posted on June 28, 2019 by maxemfingerrecruiting

This New LSU No-Huddle, Run-Pass Option Offense Will Transition from a Run/Pass Spread Offense to an Explosive  Run/Pass Option Offense with as many as Four Wide Receivers in The Game at The Same Time. It is also interesting to see The Retirement of Passing Game Coordinator Jerry Sullivan and The Hiring of an Incredible, Young Passing Game Coordinator Named Joe Brady, who is a 28-Year Old Who is a Brilliant Expert of The Run/Pass Option, from The Penn State Offense.

Although Brady Learned The Run-Pass Option Offense at Penn State, when he was a Graduate Assistant Coach Under Coach Joe Morehead, Brady Spent the Last Two Football Seasons on The New Orleans Saints Coaching Staff. Brady had a Wide-Ranging Staff Role with The New Orleans Saints, working under The Saints Offensive Coordinator Pete Carmichael.

Although he Was Named as The LSU Passing Game Coordinator, Coach Joe Brady (In Photo) will also be Working with Coach Mickey Joseph in Coaching The Tiger Wide Receivers.

“Brady is a Very Energetic and Innovative Young Football Coach,” Orgeron said. “He spent the past two seasons working with Saints Head Coach Sean Payton and he brings to The LSU Coaching Staff an Extensive Knowledge of The Run-Pass Option/Spread Offense. Brady is an Outstanding Young Coach that will be a Tremendous Asset to The LSU Football Offense.”

In his first year with The New Orleans Saints in 2017, The Saints Finished #2 in The NFL in Total Offense and they were the only team in The NFL to finish the year ranked in The Top Five in Both Passing and Rushing. The Saints were also #4 in The NFL in Scoring on Offense.

Then, in 2018, The Saints Ranked among The Top 10 in The NFL in Both Total Offense as they Finished #8 in Passing Offense and #6 in Rushing Offense. The Saints also Finished #3 in Scoring.

Then, Coach Joe Morehead took over as The PSU Offensive Coordinator in 2016 and Implemented The Run-Pass Option Offense and The Penn State Offense  Averaged 432.6-Yards of Total Offense. Then, after The 2017 Season, The Nittany Lions Offensive Coordinator was Named as The #1 Rising Assistant College Football Coach by Sports Illustrated and Brady was his Graduate Assistant. As a College Football Player, Brady played Wide Receiver for William & Mary from 2009-2012, and he was Selected to The All-American Academic Team Two Times.

With The Offensive Genius, Brady on Board, What About My Long-Time Friend and Current LSU Offensive Coordinator Steve Ensminger? The Really Great News For LSU and LSU  Fans is that Coach Brady and Coach Ensminger (In Photo Above) are both Great Offensive-Minded Experts and they are Working Together in a Great Partnership. Ensminger and Brady  are also Making Coach Ed Orgeron (In Photo Below) Extremely Excited About The Unbelievable Potential Of His New Run-Pass Option Offense in SEC Conference Games in 2019.

The New RPO LSU Offense will use as many as Four Wide Receivers on The Outside and will Also even Be-Using a Fullback Flanked on the Outside. Then, With all of these Great Outside Receivers, LSU Quarterback Joe Burrow will be Utilizing Some Various Quick Slant Pass Patterns off of a Run/Pass Option Play that Makes The RPO Offense So Effective. 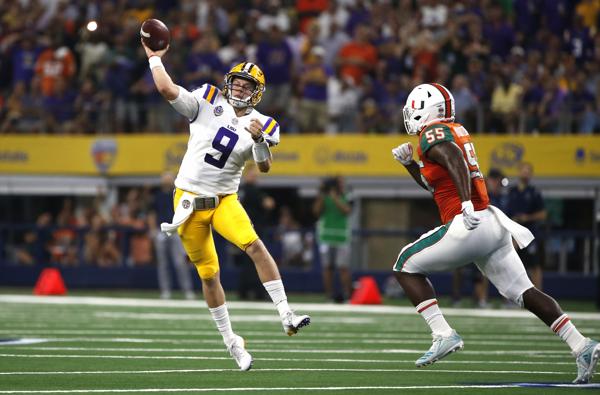 In 2018, LSU Quarterback Joe Burrow (#9) Passed for 2,894-Yards and 16 Touchdowns and was The Most Impressive LSU Quarterback in a Few Years, after Playing in a Poorly Controlled and Poorly Coached Offense. It is also Interesting to Note that Burrow is Basically Running The New RPO Spread Offense in This Photo, as he is “Out of The Pocket” and he is Looking for an Outside Wide Receiver.

“I am Very Comfortable With This New RPO Offense,” said Burrow. “I have been Running This Type of Offense ever since my High School Days at Athens High School and also my Days at Ohio State.” At Athens, Burrow was a Phenom as he Passed for 11,416-Yards and 157 Passing Touchdowns and Rushed for another 2,067-Yards and 27 Rushing Touchdowns.

Coach Orgeron Said That There is a Great Trust Between Burrow and The LSU Coaching Staff, during This Offensive Transition. There are Some Special Audibles That We Will Let Burrow Call At The Line of Scrimmage and Some of Them, we Also Allowed Him To-Call in The 2018 Season.

This New RPO Spread Passing Offense is Already an “Unbelievable Recruiting Tool” For The LSU Tigers Football Team. The Tigers Have Just Signed Four Of The Top Super Offensive Skill Players In The Country in The 2019 Recruiting Class To Play in The New RPO Spread Offense and To Prepare for The NFL. The Tigers also Were Able To Sign Four of The Most Incredible Offensive Linemen in The Country in The 2019 Recruiting Class.

“Running Backs are not Signed to come to LSU to become great blockers,” said Brady. “They came to LSU to Run The Football and Catch Passes, out of The Backfield.”

With the New RPO Spread Offense, Running Backs will Put-Pressure on a Defense that has absolutely “No-Clue” who is going to get the Football. Receivers will also be learning Pass Route Concepts so that all of The Wide Receivers on the Field can run Different Pass Patterns and be in an Incredible Matchups against all Different Defensive Backs on the Field. The New LSU RPO Offense gives the Offense more Options than an Offense that limits The Offense to Various Options.

LSU Wide Receiver Coach Mickey Joseph (In Above Photo) is a Louisiana High School Football Legend with strong Recruiting Ties to New Orleans and will Enter his Third Season as The LSU Wide Receivers Coach and he Brings Over 20 Years of Coaching Experience as well as Four Years as an All-American Quarterback at Nebraska. In 2018, Joseph Took a Young and Inexperienced Group of Wide Receivers at the beginning of the Season and Developed them into a Dependable Group of Playmakers.

Sophomore Super-Star Justin Jefferson, who had never caught an LSU Pass before The 2018 Season, led The Tigers with 54 catches for 875-Yards and Six Touchdowns. Jefferson Ranked Sixth in The SEC in Receiving-Yards and Eighth with 67.3-Yards Per Game.

The New RPO Spread Offense will give Justin Jefferson an Opportunity To Play Slot Receiver, on the Inside, rather on the Outside, where he will Present a Very Difficult Matchup for Defensive Players, Trying to cover him. In 2018, Jefferson Played on The Outside, near the Sideline, but in 2019, with The New Offense, he would be Covered  by Nickel Safeties. “Once we Find-Out The Defensive Back who Can Not Cover, then he gets our Best Receiver on Every Play and it will be a Different Receiver on Every Play,” said Coach Joseph.

Sophomore Super-Star Justin Jefferson, who had never caught an LSU Pass before The 2018 Season, led The Tigers with 54 catches for 875-Yards and Six Touchdowns. Jefferson Ranked Sixth in The SEC in Receiving-Yards and Eighth with 67.3-Yards Per Game.

The New Run-Pass Option Spread Offense will give Justin Jefferson an Opportunity To Play Slot Receiver, on the Inside, rather on the Outside, where he will Present a Very Difficult Matchup for Defensive Players, Trying to cover him. In 2018, Jefferson Played on The Outside, near the Sideline, but in 2019, with The New Offense, he would be Covered  by Nickel Safeties. 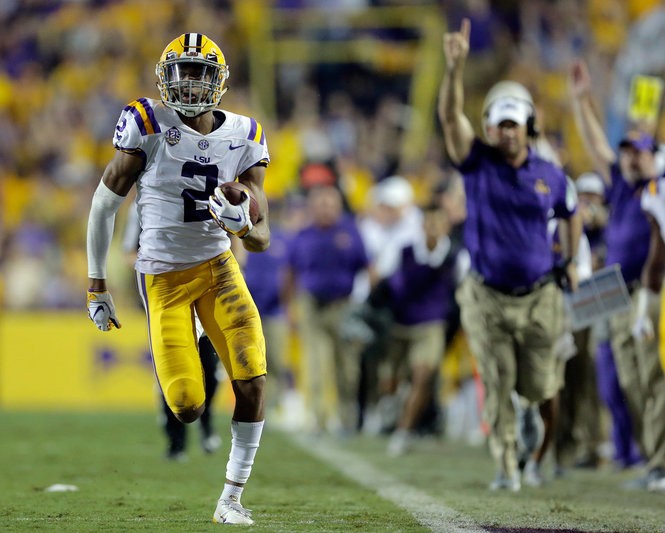